Namaste, a word in the ancient Indian language of Sanskrit, is used as a blessing of peace and at the same time carries a deeper meaning: I respect the light in you, which is also in me. In this series, Dafna Moriya collects and records moments from her recent journey to India. As in the blessing Namaste, her paintings honor the light in the moment and the light in man in depictions of simple daily occurrences interspersed with moments of prayer and holiness.

Moriya´s exhibition focuses on a dialogue between the abstract and the figurative. This additional layer in her work is actually like a dance between her series of figures titled Transition Space # 1 and her series of abstracts, Transitional Space # 2.

In the process of creating her paintings, Moriya enters the intermediate realm between imagination and reality, and between the conscious and the unconscious. Although her paintings are very concrete, the values at the heart of her study are the shapes and colors, and the relationships between them. Moriya opens forms up with daringly impressive graphic movements, creating artworks that are abstract and free. The paintings are executed in spectacular colors on large-size canvases expressing the colorful personal language the artist has developed over the past few years, with all its telltale traits and remarkable presence.

In this absolutely abstract but well-formed language, the paintings are constructed of layers of paint, with brushstrokes shaping the compositions. Moriya says that her artworks come from sailing into the depths, each one of them the product of a voyage to another world. The monumental base of her paintings is adapted to the length and depth of the journey, and every new element portrayed in the painting aspires to multiply, spread out, and take over other areas at its own characteristic pace and movement. However, since any such attempted growth obviously encounters other elements already existing on the canvas, it has to engage in negotiations with them to determine if it will conquer and obscure them, or else create a kind of symbiotic coexistence with them.
Moriya´s paintings thus come into existence through a process of accumulating factors taken from a wide range of fields, and their development through the natural selection of creative evolution. The artworks do not seek to imitate reality, but rather express the dance taking place on the border line between the conscious and the unconscious, and between reality and its acquired interpretations. Shapes and colors draw viewers into a slow deciphering process and repetitive contemplation, each time discovering a fresh aspect of shape, color, path, or insight. Further observation reveals the painting´s diverse layers, the interaction between them or its absence, their various directions of movement and rhythms. The process of unraveling the painting´s enigmas sets spectators off on a journey into their own inner spaces.

Dafna Moriya is an active artist, a senior lecturer in the field of art therapy, and the founder of the Center for Art-Based Research and Change. She believes that art has the power to create a connection between the conscious and the unconscious; and to that end she explores consciousness with patients, students and trainees, to fathom the depths of the soul and experience. In her artwork, she examines the nonverbal force of creativity and encourages the viewer to remain within the metaphorical level without translating images into words. Her allowing the elements of an artwork to occur, as if independently of her will, generates interplay between her painting activity and the developments unfolding on the canvas. During the work process on planned patterns, unplanned new elements suddenly burst forth, conquering areas in the painting and embellishing the canvas with colorful aesthetic beauty, an expanse of time and a window into the mind.
Daniella Talmor, September 2017
Namaste >> 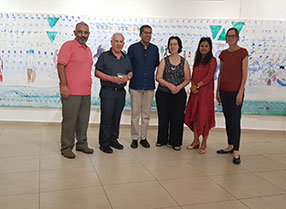 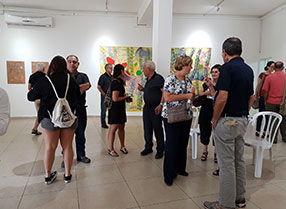 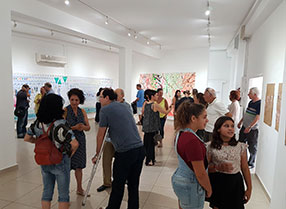 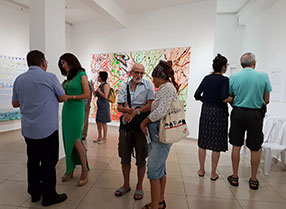 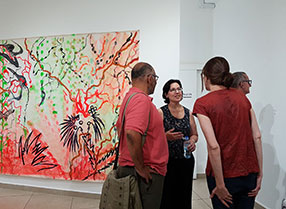 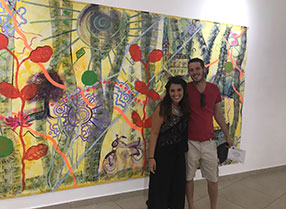